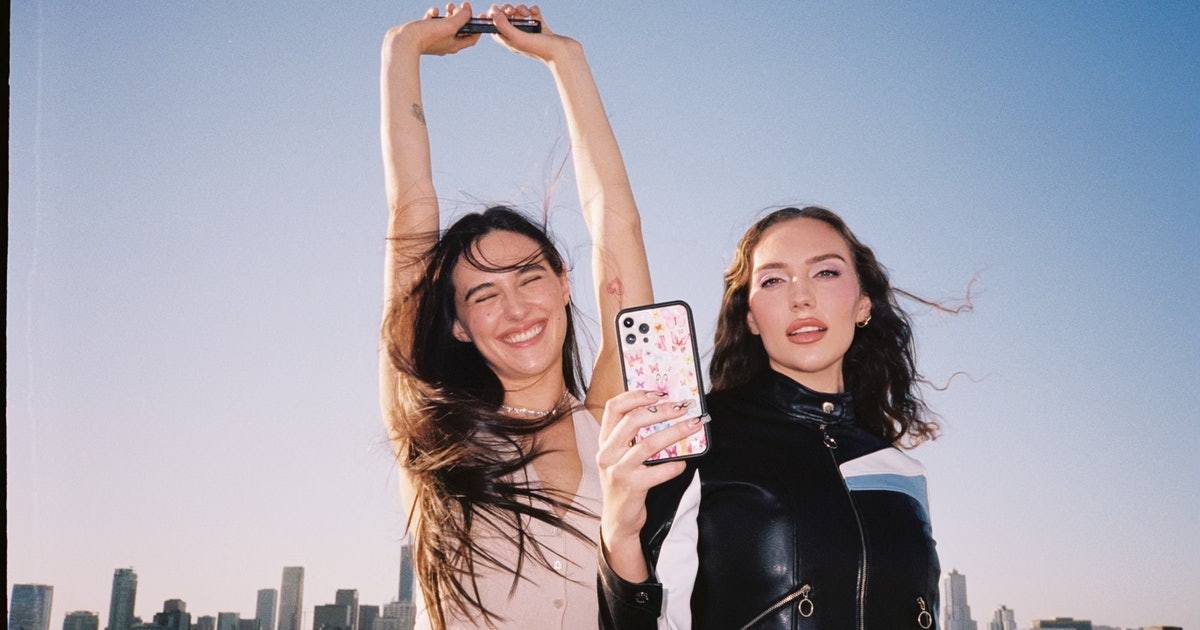 “It was a complete accident,” Devon Lee Carlson says of how Wildflower—the phone case brand she launched with her sister Sydney that has become synonymous with Gen-Z culture and “It” girls everywhere—came to be. The story begins in the bathroom, where most good stories begin. When the sisters were in high school, their mother began making colorful phone cases to sell to their friends and classmates—but it took a chance encounter with their childhood idol, Miley Cyrus, at a restaurant in Los Angeles for the family to conceptualize just how far Wildflower could go.

“[Miley] was like, you need to hop on this right now,”Sydney recalls that the pop star told their parents after they asked for photos and that the musician saw the sparkling DIY phone case. Shortly after the impromptu meet, Cyrus tweeted out a photo of the cases—causing a flood of inquiries from prospective buyers who wanted Wildflower cases for themselves. So the family worked through the night to build a website—and ultimately, the brand. “We had no inventory, and we had no idea what we were doing, but now we had orders,”Sydney “It felt like a sign from the universe,” Devon adds. “We could either take advantage of it or pass, so we just said: fuck it, let’s try.”

Below Devon, 27, and Sydney, 24, reflect on 10 years of Wildflower, seeing their designs on Euphoria’s second season, and the importance of wearing what you want to wear.

Since Wildflower started its brand, there have been 29 iterations the iPhone. How have phone case designs changed over the past ten years?

Sydney:If you look back at the first cases that we made, it is easy to see where inspiration came from. As we grew up, the cases evolved with us and our personal style. But we’ve always stayed true to what we loved at the time and what inspired us then. That inspiration can come from anywhere, honestly.

Devon: We also make sure that cases are accessible to everyone. We want to make sure that every style is covered. Sydney and me have many of the exact same clothes, but we style them differently. So with Wildflower, if there’s a case that Sydney designs, I’ll maybe tweak the colors. It’s a really collaborative effort between Sydney, our mom, and I; we don’t do anything without each other. Usually we’ll come up with a concept and my mom will either tone it down, change the colors, or do something in a way that makes it more digestible.

Your cases were most recently seen Euphoria. But not! Just Your cases. Devon, you designed a collection with Marc Jacobs, and your dress became Maddy’s birthday outfit in episode four. Can you tell us about the process of designing it and how it got on screen?

Devon: Marc Jacobs’ entire process still feels like a pinch me moment. I would make a lot of the designs and showmy friends to hear their opinions. When I was overweight in the designAlexa was able to see the final mockups after the process. [Demie]I showed them to her. She instantly liked it. “I need it. And I need it to be Maddy’s birthday dress.”She was able to see the vision instantly. She had a sample of my final dress and it was being sent to her before I even tried it on.

You both have impeccable style, but it’s also quite different. Can you describe each other’s fashionIn three words, what is sense?

Devon: Sydney’s is fun, fierce—and I’m torn between saying hot or fabulous. It might be more glamorous than it is hot. Maybe it is glamorous? Maybe a little glamorous.

Sydney: Glamorous yeah, that’s a good one. That’s what I agree with. I would say Devon’s is easygoing, elevated, and you’re a little glamorous too, but in your own way.

Even though your styles are different, do you still borrow each other’s clothes?

Devon:I believe that the only screaming matches Sydney and I have ever been in are over clothes.

Sydney: Yeah, and then an hour later we’re like hey, what are you up to?

What was the most recent item you bought?

Devon: I’ve been on a heavy eBay spiral.

Sydney: Devon loves to shop this way. I will never bid on anything ever—I can’t. I’m still trying to furnish my house so I bought two pink chairs for my room this morning, and I’m very excited!

What was the first major? fashion purchase you made?

Devon:The first designerMy friend from middle school gave me the first thing I owned. I was given a tiny pouch by her friend in middle school that you can put in your purse to store Chapstick. It was Marc by Marc Jacobs leopard print. I held on to it until it literally fell apart.

Sydney: I can still recall my first. designerSaint Laurent bag. I wanted it so badly. My eyes swelled with tears Christmas morning. It was always with me. It’s still mine. I’m saving it forever.

Devon:I still remember that. I was so jealous.

Devon: Rebecca Minkoff was a favorite of mine in high school. I love the crossbody bag with the zippers. It didn’t leave my side.

Who is your style icon

Devon: There are so many. Rihanna, Liv Tyler, RuPaul.

Sydney: I’ve been on Pinterest almost everyday. I created a board called “outfit inspo”Where can I save photos of old runway shows?

What is the best thing about? fashion advice you’ve ever received?

Devon: If it doesn’t make you feel good, don’t own it. You should feel able to pull anything out of your closet, put it on, and feel good. This is my tight little secret. ‘90s vintage Guess vest, and it makes me feel so good and hot and confident every time I put it on. If I ever don’I feel great when I put it on. That’s how every piece should be in your closet.

What is one? fashion trend that everyone loves that you can’t get behind?

Sydney: Devon and Devon were like this in the past. “What in the world are sneaker wedges?”

Devon: I love a challenge, even when it comes to sneaker wedges. Even if I hate something, I’ll try to make it cute. I won’t say no to anything. Unless someone’s doing something that feels not authentic to them or their individual style, I’m pretty much down for anything. I love to see people experiment. No judgement.

What is your favorite place to shop when you’re in New York?

Devon: Opening Ceremony was something I used to go to every single day in New York. I loved finding new, cool designers there and it was a great place to shop. Now when I’m there, I’ll stop into 10 ft Single by Stella Dallas and James Veloria.

Sydney: I enjoy being a part of the journey. I’m not a big IRL shopper, I like online shopping. But I love going along with Devon because it’s something I know she loves to do.

Devon: It’s because she has a time limit on how much she can shop. She’ll just be texting me from across the store like “Can we go? Can we go?”

Sydney: Yes, I do sometimes need to be saved.