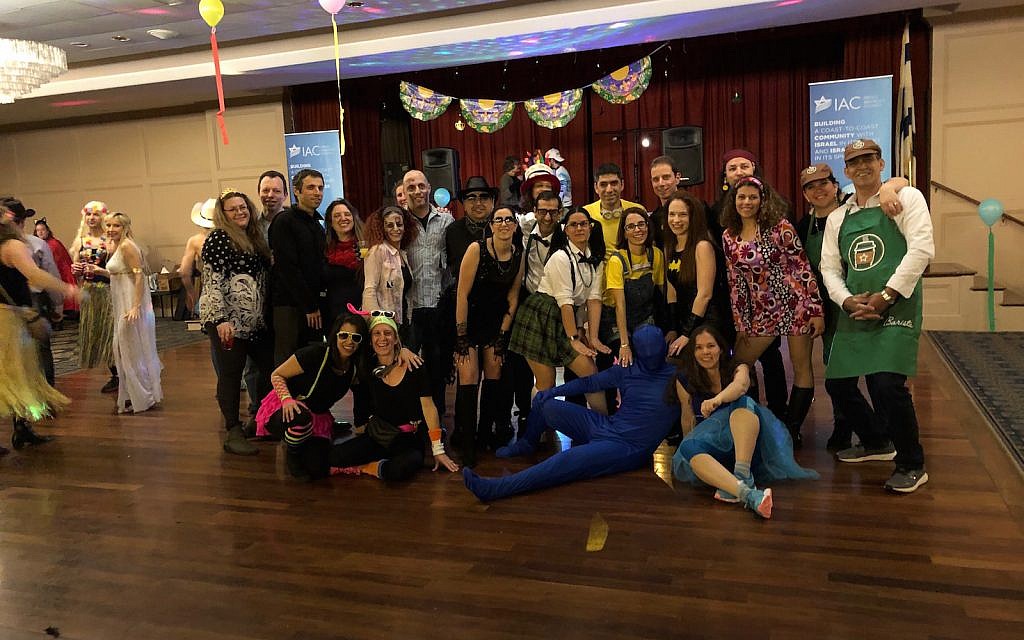 A hot dog, an emoji and Superman walk into a synagogue — and there’s no punchline. It’s the reality for Allan Rosenblatt, owner of Purim Mega Store in Brooklyn, New York.

Rosenblatt sells hundreds upon hundreds of costumes every year. He sees the children at his synagogue wearing them, enjoying their hamantaschen sugar highs, and giving headaches to grown-ups with their graggers.

Purim Mega Store is only open for a couple of months every year — much like the secular Spirit Halloween stores that crop up all over the country come Oct. 1 — and the two Sundays leading up to the 14th of Adar (this year, March 16-17) are his busiest.

“I can’t even begin to tell you — there’s hundreds of costumes,” Rosenblatt said.

However, Purim has had themes of costumes and merriment in its traditions for a while. The introduction of costumes to the holiday was not without controversy.

The first mention of the use of costumes to celebrate Purim was by Rabbi Yehuda Minz, a 15th-century Italian rabbi who made the argument that costume-wearing, even cross-dressing, is permissible because it serves the purpose of creating joy, according to Ori Z. Soltes, professor at Georgetown University’s Center for Jewish Civilization.

Others speculate that Purim’s costumes were inspired by the medieval Catholic tradition to dress up on Mardi Gras. Rabbi Shlomo Broody, author of “Guide to the Complex: Contemporary Halakhic Debates”Founder director of Tikvah Overseas Student Institute.

“Sometimes you adapt religious meaning to broader customs that fit the holiday as well,”Brody spoke out about the costume-wearing. “I don’t think it would have been if it didn’t fit with the holiday, but it could have just been a coincidence.”

Scholars agree that Purim’s themes and story lend themselves to costuming. Apart from the general holiday revelry, there are many examples of being disguised or hidden in the Purim megillah. Esther doesn’t reveal her Jewish identity to King Ahasuerus and Haman, while Haman hides his plot to kill Mordechai. Purim is also one the few Jewish stories that God doesn’t explicitly appear in.

Dressing up for Purim also aided in fulfilling the Purim mitzvah of matanot l’evyonim — giving directly to the poor. People in need could keep their dignity intact by dressing in disguise or masking their faces so that they don’t reveal their identities but still receive aid from others.
Today, mishloach Manot, Purim baskets are given to all as a way of preventing those in need from disclosing socioeconomic status.

Purim spiels emerged in the 17th Century. They used costumes and allegory to create a sense. “comedic catharsis,” Soltes explained.

The Purim spiel tells the story, but it also touches on political issues and popular culture. The spiels were created when Jews in Europe couldn’t openly criticize Christian hegemony. They allowed them to voice their grievances publicly without drawing the attention from their oppressors.

“We’re making fun of these bastards who are treating us so poorly, but we’re doing it in a disguised manner, so they don’t even realize this,”Soltes,

Although costumes have been a part of Purim traditions for over 600 years, some Jewish thinkers hesitate to embrace the role that disguises play in the holiday. Dissenting from Rabbi Minz’s opinion, 20th-century Rabbi Ovadya Yosef urged Jews to avoid crossdressing and other costumes that could be seen as debauchery. Shmuel Abhab, an Italian scholar from 17th century, believed costumes detractfrom the joy of the holiday.

Brody stated that the argument against Purim costumes was ultimately motivated by the fear that Purim would be more associated with frivolity and Jewish resistance, and the lessons that can be learned from the Purim story.

“People love the costumes, as far as what people associate [Purim] with,”Brody said. “The wisdom of the people won out.”

The commercialization of the holiday — and holidays in general — particularly in the United States, adds weight to this argument.

Similar to Purim costumes coinciding with early Mardi Gras celebrations, in 19th and 20th century America, holidays such as Purim and Chanukah — which were in close calendar proximity to Easter and Christmas, respectively — began to mirror commercial traditions of their Christian counterparts.
It was “in part, a function of all the developments in the 19th century, in which Judaism tries to adapt itself to the reality and the illusion of being abused, being accepted into the mainstream,”Soltes,

Purim began becoming commercialized in America during World War II; the rise of Halloween-esque costumes in Israel took place in the following decades, after the founding of the state and in the 1960s and ’70s, when it was gaining its economic sea legs.

Brody, who is from Israel, is experiencing the Purim-craze for the first time. “Every children’s store, they’re selling costumes; they’ve been selling hamantaschen for a few weeks. Israeli schools, they’re not learning too much this month. There’s a lot of costume-wearing, for better or for worse.”

The synagogues who are practicing their spiels in preparation for the holiday are confident in the ability to balance frivolity, the true meaning of the holiday.

Congregation Rodeph Shalom, Philadelphia, will present a spiel this season based on 2022 Disney film. “Encanto,”Rabbi Eli Freedman mentioned that this year’s spiel theme is very popular because it is easy to adapt Disney songs, and because it is so popular among young people. (The movie’s original song “We Don’t Talk About Bruno”This is only the second Disney film song to reach the top of Billboard’s Top 100 charts.

The rabbi stated that Jewish children can connect with a story by drawing heavily from popular culture.

“It’s sometimes hard for especially students, younger folks, to be able to relate to a story which took place thousands of years ago in Persia,”He said. “The same is true for the stories from the Torah. Ultimately, as a rabbi, when I give a sermon on Shabbat, the main purpose of my sermon is the same thing … taking this text from thousands of years ago and making it relevant to today.”

Rodeph Shalom’s spiels have also worked to build community. The congregation merged in 2015 with Beth Ahavah, an LGBT congregation. Since the merge, one of Beth Ahavah’s founders, Jerry Silverman, dresses up in drag as Queen Esther, an effort that Freedman described as “a gift to the rest of our congregation.”

Rabbi Abe Friedman, Temple Beth-Zion-Beth Israel, Philadelphia, felt the joy mixed with the seriousness of the holiday firsthand in 2020. BZBI hosted the Purim celebration only days before the pandemic outbreak.

“Emotionally, it’s really associated with the move to the pandemic,”Friedman said.

Friedman was amazed at the creative responses to his open call for congregants to send in prerecorded videos for compiling a 2021 Zoom Purimspiel. One spieler used the megillah-reading tropes to chant the contents of his CVS receipt.

Friedman said that Purim allowed the congregation not to lose sight of the importance of life, particularly during the last year’s pandemic restrictions. Joy and laughter are vital parts of Jewish life.

As Purim approaches this year, Friedman is drawn to the images in the news of Ukrainian grandmothers lecturing Russian soldiers, invoking similarities between Esther standing up for the Jewish people, an image that can only be understood by fully immersing oneself in Purim’s traditions.

“Purim is about more than just a party,”Friedman said. “The party is a means to actually understanding the power that we have in the world. … and I don’t know that there’s a more important message for us to be dealing with right now.” PJC

Sasha Rogelberg writes articles for the Jewish Exponent. This is an affiliated publication.