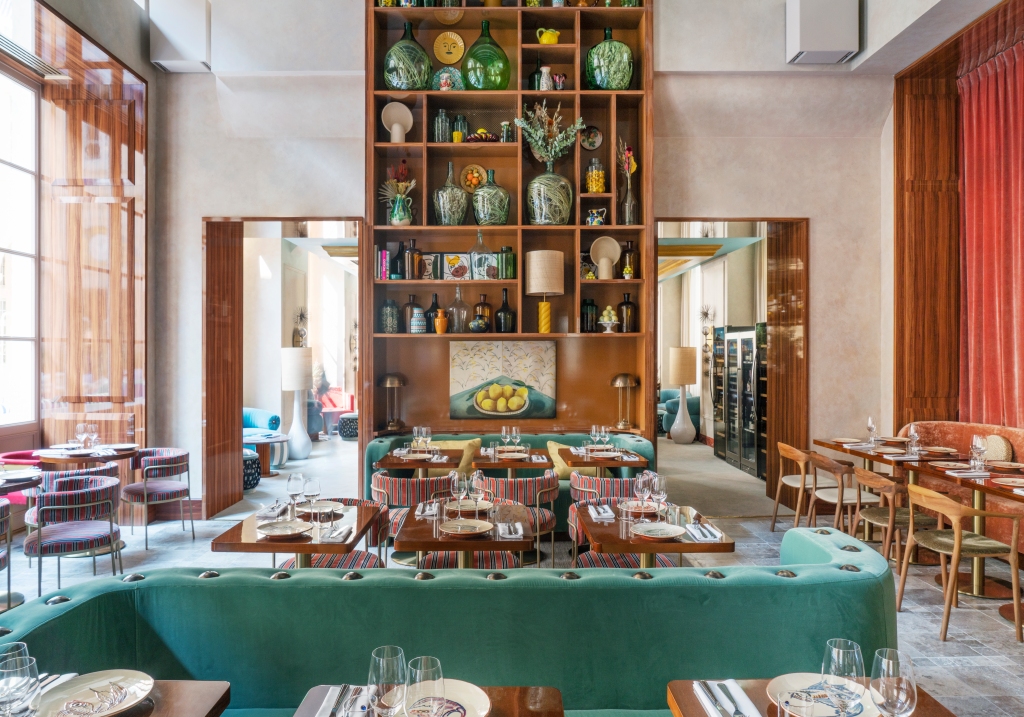 SHOP THE DROPS: After switching locations with the men’s boutique and extensive renovations, Giorgio Armani’s women’s store is now a 5,500-square-foot, two-story location on Avenue Montaigne. And because it’s fashion week, the Italian designer will be celebrating with an evening event at famed nightspot Castel on Wednesday.

The first project for Vuarnet’s new artistic director Boramy Viguier was to turn the ski apparel company’s Parisian flagship into his impression of a mountain lodge, “so that the customer could have the feeling of escaping from the city,” he said. But this is no quaint wood cabin. With its sharp ’70s furniture, dark timber paneling and a mirrored wall set with screens, the 1,000 square feet imagined by London-based retail design studio Brinkworth looks fit for James Bond.

With their family supplying sapphires from Sri Lanka to Paris’ best jewelry houses, the Ponweera siblings decided to tap into their cache of fabulous gems to launch Maison Avani, a high-end jewelry proposal based out of their new address on Place du Marché Saint-Honoré. Expect a rainbow of faceted and uncut stones — sapphires, of course, but also emeralds and tsavorites — waiting only for the imagination of its customers and creative director Milan Ponweera.

Sneakerheads and streetwear aficionados will be able to get their fix at the recently opened Parisian outposts for Stüssy and high-end kicks P448 — complete with a small-scale halfpipe. — Lily Templeton

MEGA BITES: “One of the powers of gastronomy is to put and restore a smile on people’s faces,” said Michelin-starred chef Jean-François Piège. So when he needed a name for his latest restaurant in the Hôtel de la Marine, in tandem with hospitality specialists Moma Group, the happy hues evoked by the word Mimosa felt like the perfect moniker for a place “expressing the [French] south, the sun, nature and pleasure.” Expect plates made for sharing that explore inspirations from both shores of the Mediterranean, but also the “egg mimosa,” a bistro favorite here revamped with taramasalata, lobster or bottarga.

Across the Seine, whether you’re an automobile or a human in need of a refuel in the seventh arrondissement, look no further than The Gasoline Stand. There’s petrol and coffee, but the proprietor — entrepreneur Ramdane Touhami — has brought together artisanal coffee, collectible tchotchkes, a selection of sodas from around the world and vegetarian hot dogs with 10 different sauces.

With its long stainless steel counter perfect for a quick bite or to seat walk-ins, Le Collier de la Reine (or The Queen’s Necklace) is among the best latest iterations of the French bistro, with seafood as a specialty. Expect well-executed modern French classic and an expansive wine cellar. — L.T.

GREEN BEAUTY: After Lyon, France, Ecocentric has opened its second boutique, in the French capital, that sells organic and natural cosmetics.

SHOWTIME: Marine Serre will follow her March 4 show with a two-day exhibition turning Lafayette Anticipation into a three-floor “hard drive” containing the DNA of the house. The first two levels will explore her design process and the third will showcase strong feminine figures through 15th- to 17th-century paintings. A pop-up is to offer a curation of her pieces, books and objects, as well as a space for people to revisit their own garments with the brand’s moon logo.

Three decades of Japanese photographer Yoshi Takata’s career in Paris are featured at Thaddaeus Ropac’s gallery in the French capital. From street photography to portrait and fashion shots (she was a great friend of Pierre Cardin), the works span from 1955 to 1987.

For the first time in France, Native American folk artist Joseph E. Yoakum’s landscapes are on display, at the Galerie Derouillon. Alongside the artwork, silk and cotton pieces by Lamaire, which were inspired by the artist’s landscapes and are part of the house’s spring 2022 collection, will be exhibited.

Taking pride of place at the Hôtel de la Marine, the “Treasures of the Al-Thani Collection” showcase is a 120-piece curation drawn from the fabulous cache assembled by Sheikh Hamad bin Abdullah Al Thani, a keen collector with an eye for examples of human ingenuity. — J.W. and L.T.

ON THE BLOCK: Vintage collector Didier Ludot is putting 300 black dresses up for sale at Paris auction house Cornette de Saint Cyr. Drawn from his stash spanning from 1930 to 2010, the selection includes pieces by Pierre Cardin, Saint Laurent Rive Gauche or Prada; alongside prototypes from the “Les Petites Robes Noires” collection he designed with Félix Farrington between 1999 and 2015. Nine paintings by René Gruau, from a private collection, will also go under the hammer. — L.T.

OPEN HOUSES: A crop of new hotels have opened in the early days of 2022. Hospitality group Paris Society has launched Villa M, a Philippe Starck-designed hub meant to bring tourists and locals together around a hotel, restaurant and rooftop bar with expansive views over the Left Bank.

Also on this side of the Seine is the brand new Hôtel des Académies et des Arts, a boutique address offering 20 unique rooms and an artist studio, where drawing, sculpture or photography classes will be offered. An honesty bar is available for those whose main practice is conversation, and a wellness center for anyone who prefer yoga or massages. — L.T.

Paris Scene: What to Do Between Fashion Week Shows