Not Caring About Meghan Markle Isn’t An Option 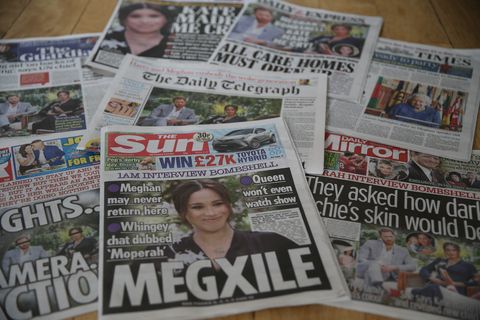 On the day Meghan Markle walked down the aisle in 2018, I wasn’t even aware a royal wedding had been scheduled. Forgive me for adhering to the contours of whatever hole I crawled out of, but, back then, my radar was pointed toward finishing my graduate thesis, and that was about it. In 2016, while I was still in college, I’d briefly worked for the opinion section of a British newspaper that frequently criticized monarchists, and thus I’d absorbed my coworkers’ mentality that the royal family were mostly a bunch of ancient sods. I couldn’t understand the American fascination with them.

That morning in 2018, I was in Kansas City, Missouri, sitting in a sound booth with the teens of Generation Rap, a cohort of diverse students who broadcast their own radio show on Saturday mornings. I was interviewing a few of them for a story, and I expected them to be zombie-like, bemoaning the early hour. Instead, they were practically electric, Red Bull-imbued, awash with joy and drama and gossip. They couldn’t stop talking about her: yes, Meghan, the actress from Suits. She was beauty, grace, the future personified, an outsider who’d infiltrated the castle, a Black woman suddenly thrust into power, into one of the oldest and most impenetrable institutions in the world. Her Givenchy dress, her Colgate smile, the way Harry looked at her and blinked, as if stunned by his own good fortune. Every second was a fairytale.

I remember thinking the Generation Rap students’ excitement was heartwarming and wonderful—enough so that I scribbled it down in my interview notes—but that it couldn’t possibly last. Markle, like all celebrities, would eventually be stripped of veneer, and her princess-like power would dissipate. She couldn’t be a heroine forever, not with the monarchy already pressing its foot on her throat.

On one level, I was right. On another, I couldn’t possibly have been more wrong.

Last night’s interview was about so much of what America itself has operated on for centuries: racism; misogynoir; toxic media; a fundamental disinterest and even distrust in mental health; a chokehold on the reins of systemic change.

Last night, we witnessed the culmination of the fairytale bubble ballooning to its limits, and finally—with a satisfying pop—exploding. In the CBS special titled Oprah with Meghan and Harry, Oprah Winfrey gave a masterclass in interviewing with precision, pressure and empathy, questioning the couple on why they made the polarizing decision to step away from their duties as senior members of the royal family. There’s already been hundreds of stories written on what was said last night, and why it was particularly shocking. The two dropped numerous bombshells, including that Meghan had experienced suicidal ideation but received no help from inside the palace; that a member of the family had expressed concern over her future son’s skin tone; that Prince Charles had stopped taking Harry’s phone calls; that the couple had been cut off financially; that they’d still be part of the royal family if they’d received the support they needed; that the catalyst behind their departure was racism.

But what strikes me as most profound after watching the reactions roll in is not just what Meghan shared, but how the world has reacted. I am far from the only American who has suddenly found herself transfixed by this woman, when for years I claimed no affinity for the royals. We are all part of the Meghan Markle hive now.

17.1 million people tuned in to watch the Oprah interview. Why? What is it about this story that makes it so impossible to turn away from?

I could take the cynical route, and say it’s all about drama. In a television landscape sucked dry by quarantine, we’re celebrity-starved and desperate to watch a meltdown. I can admit this to myself, however embarrassing it is. I, too, was tuning in to the Oprah interview, in part, because I wanted to watch something smolder and burn. But then I probed myself further—I never watch reality TV or other programming where house-burning happens regularly. So why did I sit down for this? Why did I care so deeply about two rich people in Santa Barbara, so deeply that my heart was racing the moment they opened their mouths? Why did I want to watch a monarchy crumble, one that has no real bearing on my life as an American?

Contrary to what (mostly white and conservative) talking heads on Twitter will tell you, Meghan Markle’s plight is not “irrelevant” to Americans, nor is it merely fueled by the glittery facade of celebrity. Last night’s interview was about so much of what America itself has operated on for centuries: racism; misogynoir; toxic media; a fundamental disinterest and even distrust in mental health; a chokehold on the reins of systemic change. We are transfixed by Meghan not because she can represent any one group in its entirety, but because she is a piece of us, a piece of our system, transplanted and blown up on a television screen for us to scrutinize in startling real time.

Day-after reactions to the Oprah interview in the British press.

Last night’s interview was, yes, about the British monarchy, and the numerous ways its chilly detachment from society has perpetuated so many evils. But, like the first few seasons of the—albeit fictional—Netflix show The Crown, it was also about sudden, breathtaking intimacy: a real look at the royal family, one that wasn’t funneled through the British press. It was a front-row seat to the interior life of a famous woman and a prince, both of whom we’ve been prevented from knowing at all.

This was about what it’s like to see yourself transformed in the media, to become a victim of your own success, to find nowhere to turn when you’re completely stripped of resources and prepared to end your own life because of it. It was about recovery, healing, and finally some form of justice.

Of course we see Diana in her. Of course we see Diana in Harry. We are transfixed because we’ve seen this before, and we will see it again, and the cycle will continue spinning around and around until someone, anyone, everyone pushes for systemic change. And like Diana before them, Harry and Meghan are trying to stop the wheel. I don’t know if they’ll succeed. But God if this isn’t the first time in a while I’ve felt hopeful about it.

Like so many others, I suddenly care about Meghan Markle because she was brave enough to take a bat to the institutions that have harmed her and so many others. As an inherently anti-confrontational person, this sends dread oozing through my blood. But to all those who’ve said she and Harry shouldn’t have talked to Oprah and instead escaped to a quiet life in California, I posit this: Who would that have helped, other than the institution itself? How could Meghan experience something so heinous, so dehumanizing, and then decide she doesn’t care if it happens again, perhaps to someone else next time? Meghan and Harry have already gone through hell. They’re setting the record straight so that maybe, somehow, they and their loved ones won’t have to again. They are trying to do good.

I don’t know Meghan Markle. But, along with millions of viewers, I’m ready to ride for her today. She might disappoint me tomorrow. She’s a celebrity; she probably will. But today, I know exactly why those Generation Rap students were so buoyed on her wedding day. They seemed to know what would happen a few years later. Her bubble has burst, and yet here she is, all the more powerful for it.

Lauren Puckett
Lauren Puckett is a writer and assistant for Hearst Magazines, where she covers culture and lifestyle.