New Photos of Kristen Stewart as Princess Diana Are Here, and the Transformation Is Striking 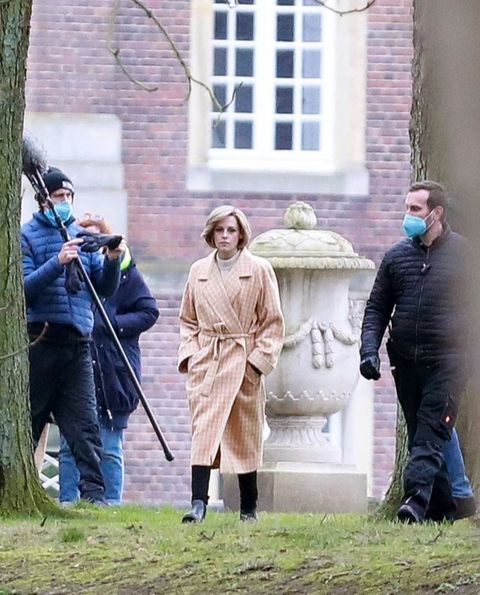 While the world started seeing clips of Meghan Markle and Prince Harry’s bombshell interview about the royal family, Kristen Stewart was busy working on a movie about how that same family treated Princess Diana, Harry’s mother. New set photos came out of Stewart in character as Diana on the set of Spencer at Schloss Nordkirchen palace near Dortmund in Germany last week.

This time, Stewart appears in a tan gingham wrap coat, cream turtleneck, and dark pants. She has on a wig styled in Diana’s signature blonde bob. She accessorized with dangle earrings.

Spencer is Pablo Larrain’s Princess Diana movie based on the Christmas weekend that Diana spent in Sandringham in 1991 where she decided to get a divorce from Prince Charles. It’s tentatively set to come out this fall, and Stewart has been filming it all winter.

Stewart spoke to InStyle in October 2020 about preparing to play the princess ahead of film production. “We don’t start shooting until mid-January,” she said. “The accent is intimidating as all hell because people know that voice, and it’s so, so distinct and particular. I’m working on it now and already have my dialect coach. In terms of research, I’ve gotten through two and a half biographies, and I’m finishing all the material before I actually go make the movie. It’s one of the saddest stories to exist ever, and I don’t want to just play Diana—I want to know her implicitly. I haven’t been this excited about playing a part, by the way, in so long.“