How the Non-Monogamous Black Woman at the Center of ‘Ma Belle, My Beauty’ Empowered Me 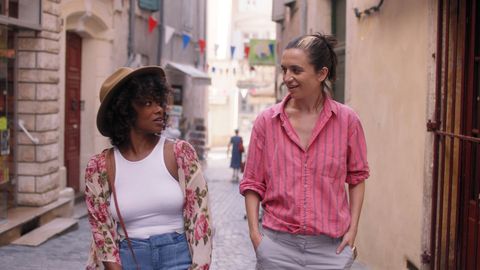 At 33, it feels like I’ve known non-monogamy was right for me forever. But as someone who grew up surrounded by monogamy—in my family, in my friendships, in my culture, in my media consumption—I know that, at some point, I must have learned this about myself. But I can’t remember my younger self even considering entering more than one long-term, intimate relationship at the same time.

While watching director-writer Marion Hill’s feature film Ma Belle, My Beauty at this year’s virtual Sundance Film Festival, I felt seen in my desire for a different type of intimate partnered love. Protagonist Bertie (played by Idella Johnson) is a talented Black singer in her late 20s or early 30s living in France but originally from New Orleans. The story follows Bertie as she navigates the remnants of her past polyamorous relationship with her white French now-husband Fred (played by Lucien Guignard) and her white American former lover Lane (played by Hannah Pepper). Bertie’s marriage is off, the communication distortion made apparent through scattered recollections of an easier time in New Orleans, when Bertie, Fred, and Lane worked, loved, and lived together. The inevitable turmoil erupts when Lane arrives unexpectedly at Bertie and Fred’s home.

Bertie is living abroad as a Black woman in a very white country, in an even whiter countryside where she does not speak the language, avoiding her passion to cope with a deep, tender trauma and not knowing how she feels about someone who hurt her immensely but also reinvigorates her. These are the knotty dynamics coursing from scene to scene, stoking a slow burn that builds to a brilliant blaze. And to my surprise, polyamory serves as mere backstory, not a sensational prop or shameful scandal. It’s simply a given, just as monogamy is in most romantic films—at least, a majority of the ones I’ve watched all my life. Instead, the relationship and most of the film centers on Bertie, a complex Black Southern natural-haired woman, a character typically not prioritized in an indie drama with a multiracial cast helmed by a filmmaker who is not Black. In Bertie, I recognized parts of a life that reflected my own.

As a Black woman who grew up in a post-‘90s United States and attended predominantly white schools, I’d been taught and convinced to consume mainstream conventions rooted in anti-Black racism, misogynoir, and Western standards. Even the most romantic ones, the most beautiful: the rom-coms, the Hollywood heartthrobs, the beauty standards, the weddings, the marriages. A happy home and a happy life.

But as the daughter of a fiercely independent Black mother who raised me in her image, I’ve always been curious and critical about accepting society at face value. Even my surroundings challenged the notion that things are the way they are because that’s simply the way they are: in driving from the industrial, concrete inner-city hood I grew up in, surrounded by sharp, creative, and resourceful Black and brown people, to the more manicured, cookie-cutter suburbs where I learned about mostly white culture from mostly white teachers surrounded by mostly white students whose homes I would visit in similar suburbs, I saw no difference in the people. But I saw difference in the circumstances, in the resources, in the housing, in the employment opportunities, in the ease (or dis-ease) with which they navigated the world. And so I questioned everything given to me as fact, as nature.

“Self-definition is a worthwhile, continuous practice that demands and develops autonomy.”

Today, when monogamous people ask me why I’m non-monogamous, I simply ask them if they’re monogamous. If so, why? I do so to make them understand what it’s like to be questioned about something they believe to be matter-of-fact, a given. Like so many things in our society, monogamy is assumed to be the standard. Like white people, white culture, heterosexuality, the gender binary. In a world and society built on delegitimizing and devaluing my life and every fiber of its being, what has helped me feel more alive and in control is carefully examining all the conventions, assumptions, and expectations that make it up, and discarding or transforming the ones that misalign or aggravate my blueprint, my dreams, my desires, my goals, my liberty. Monogamy happens to be one of those misfit parts I discarded.

One particular moment that sticks with me from Ma Belle, My Beauty is when Bertie makes clear that neither her romantic partners nor her lovers determine her self-esteem. “My happiness is not tied to you, it’s not tied to him,” she reminds Lane during a long overdue confrontation. Hill could’ve easily anchored Bertie’s motives to her relationships, but instead, they flesh out a nuanced person normalizing both her internal conflicts and the external circumstances that triggered them. I won’t reveal the ending, but will say that Bertie must face her own vulnerability to find herself again. In doing so, she rediscovers her passion and joy.

A fierce warrior of love, self-determination, and Black, queer women like herself, Audre Lorde famously wrote, “If I didn’t define myself for myself, I would be crunched into other people’s fantasies for me and eaten alive.” Openly exploring consensual non-monogamy as a Black woman means practicing a social taboo in a society in which my own existence is also taboo, and cultivating my own fantasies of liberation, pleasure, creativity, and community. Self-definition is a worthwhile, continuous practice that demands and develops autonomy. It involves cutting and mending and ripping and discarding and bonding, sometimes over and over the same raw areas. But with that comes one of the only things that can never be taken from you—the freedom to live your life on your own terms.

Patrice Peck
Contributor
Patrice Peck is a journalist and cultural critic based in New York City.