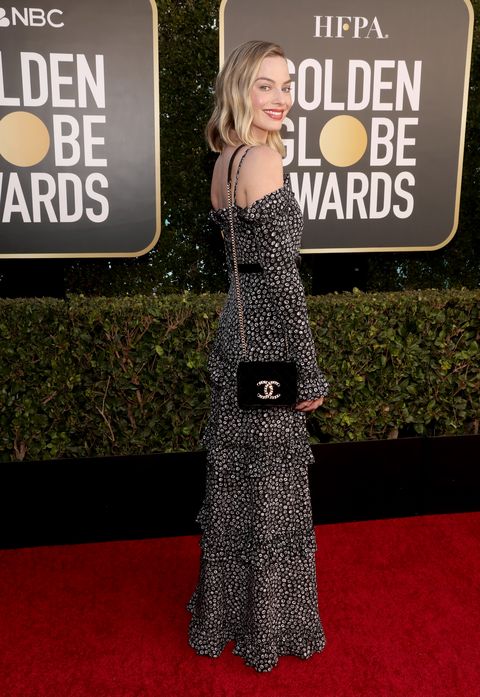 Margot Robbie brought a little glamour to the Golden Globes tonight when she appeared on the broadcast as one of the night’s presenters. Robbie wore a belted Chanel black dress with a high-leg slit on the red carpet and accessorized with a Chanel purse.

But Robbie’s work is still being recognized: Promising Young Woman, which she produced with her production company LuckyChap Entertainment, has four Golden Globe nominations, including one for Best Drama Motion Picture.

Robbie explained in a December 2020 interview with The Hollywood Reporter that while LuckyChap has produced films starring her in the past, the company’s goal is to elevate female stories and storytellers. “We never started a company to be a starring vehicle for me or to be a platform for me to chase my dreams,” Robbie said. “It was really that we wanted to expand what female stories and female storytellers could do in this industry, and I don’t need to be onscreen for that to happen. But it’s a wonderful position to be in since my platform can also open some of those doors. And especially at the beginning, there were a lot of first- and second-time filmmakers that we wanted to work with, and you can’t get something greenlit without a bankable name attached and I’m so lucky to fall into that bracket [of bankable names]. But I’m not right for every role. I felt that way about Promising Young Woman.”

She explained why she felt Carey Mulligan was right to star in Promising Young Woman over her: “I was like, ‘I think I’m who people would expect to be cast in this.’ But the most delightful thing about Promising Young Woman is that it takes you by surprise, and I just felt like I wouldn’t be that surprising—me doing these kinds of things with people’s perception of who I am and the characters that I’ve played,” she explained. “Carey Mulligan, however, is an actress that has this air of prestige around her. She’s in period dramas. Throw her in Promising Young Woman, and people’s minds get blown.“

Here’s How to Livestream the Michael Kors Fall 2021 Show

Who is Marie-Laure Cérède, the designer of the iconic Cartier watches