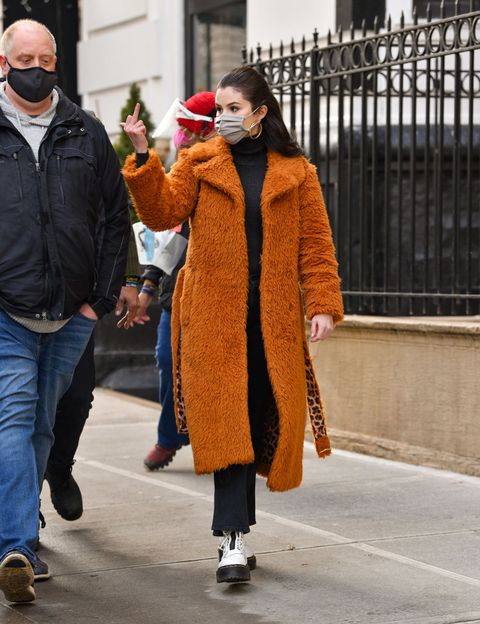 Selena Gomez has been filming upcoming Hulu series Only Murders in the Building for the past few months in New York City. And because the show has been shooting outside on the Upper West Side often, paparazzi have regularly gotten photos of Gomez dressed up on set.

Gomez usually goes along with it. But yesterday, Gomez hit her limit. While it’s unclear what the photographer did to provoke her, she flipped them off, and others captured the moment. It’s a very New York in 2021 mood.

Gomez was photographed shooting a scene with her Only Murders in the Building co-star and on-screen love interest Aaron Dominguez. The two looked cute together, showing PDA while shooting a scene in character:

Gomez and Dominguez have become friends off set too, with Gomez trolling him and inviting him onto her Instagram Live this weekend. Gomez explained at one point why she even went on IG Live in the first place: He did before her, and it was the best platform to troll him: “I gotta humiliate you. There’s no other way to do this,” she said jokingly. There’s a lot of natural chemistry between them that you can take in below:

Gomez spoke a bit during her IG Live about what Only Murders in the Building is about: “The show is actually really fun,” she said. “It’s kind of a dramedy, so there’s moments that are real and then there are other moments that are complete chaos and hilarious. I’m working with Steve Martin and Martin Short and if you don’t know their work, by the way, they’re pretty amazing people to be around.”