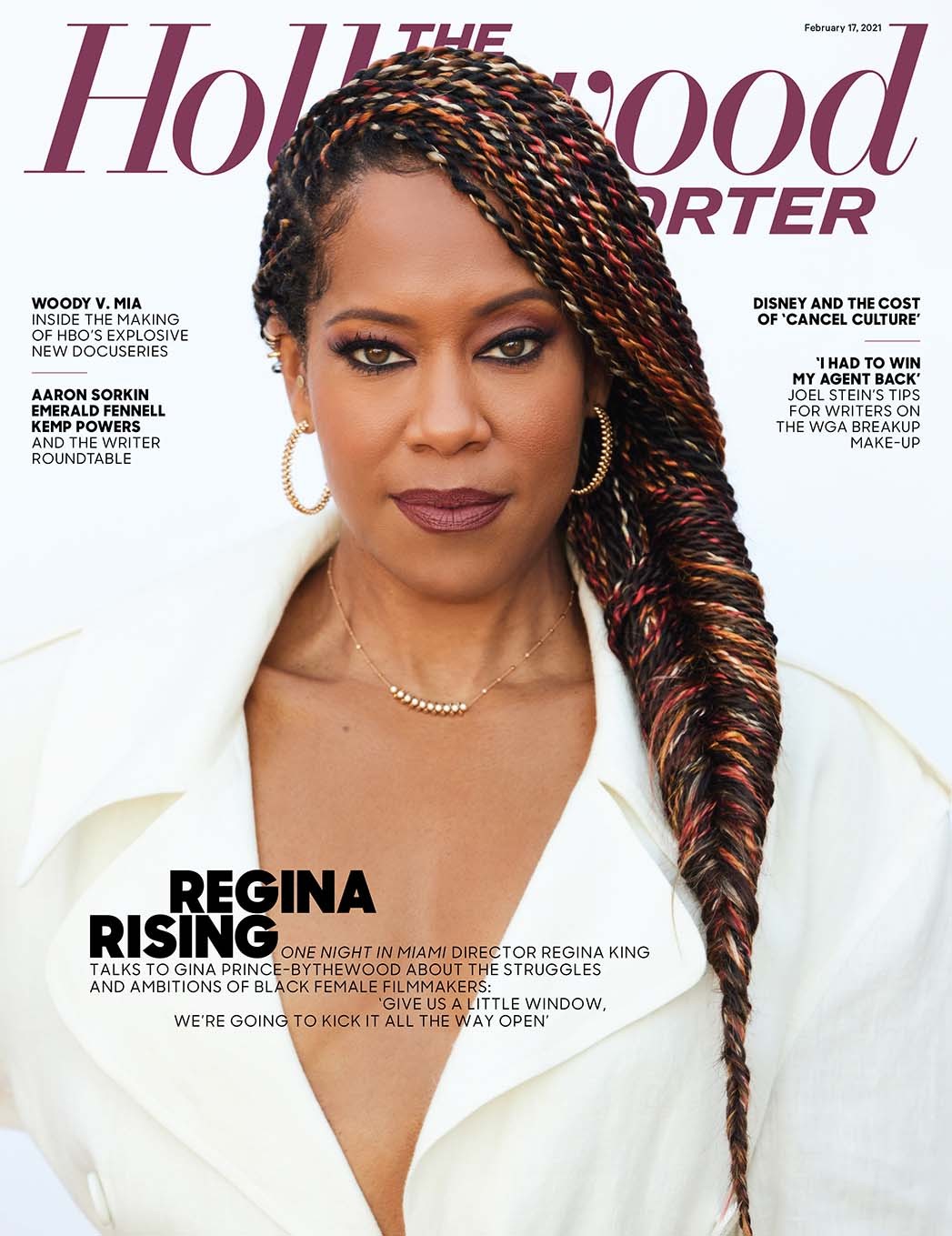 The Hollywood Reporter agrees that Regina King has been on a roll since 2018: from her first Oscar for her role in “If Beale street could talk” to her first directorial debut with “One night in Miami.” Just recently, it was announced that the actor and director had been tapped to play the first Black congresswoman, Shirley Chisholm in the titular movie.

In honor of Black History month, The Hollywood Reporter brought together Regina King and Gina Prince-Bythewood, Director of “The Old Guard,” “Love and Basketball,” etc — two thriving Black women in Hollywood — for a star on star conversation about Blackness, ambition, their sons, being a Black woman in Hollywood and more.

For her Hollywood Reporter cover, Regina King was styled by her go-to styling team, Wayman Bannerman and Micah McDonalds. Her soft glam makeup was done by Latrice Johnson, and her hair styled by Larry Sims and Angie Perrantes. The shots were taken by Matt Sayles. She is wearing an Alberta Ferretti coat, Paris Texas boots and a mix of Cartier and Bulgari pieces of jewelry.

To begin the conversation, Regina borrows a quote from renowned writer, James Baldwin: “Our crown has already been bought and paid for, all we have to do is wear it.”

Here are 3 things Regina King shared with The Hollywood Reporter…

#1. On greatness being subjective:

When asked if she feels greatness at the moment, Regina tells Gina she does not believe greatness is a certain thing. She believes it is subjective. “I guess I have a hard time with phrases like that. Because what is that? It’s subjective. There are moments that I feel like I’ve always been great. And then there are moments that I feel like there’s no such thing as greatness being a certain thing.”

She explains further citing Beyoncé and Serena Williams as examples of people who have achieved career greatness, and Chadwick Boseman as someone whose greatness encompasses how he was able to touch everyone around him with kindness.

#2. On the power of ambition as Black women:

The two bonded over the way Black women are confident about their greatness, in a way labeled arrogant. They agree that there’s nothing wrong with ambition and that ambition is indeed good. For what they do, the difference between good and great is minuscule.

Regina says: “I feel like just as Black women, we are so conditioned to not feel that it’s OK to want to be great. Something I find often with Black women is that you give us a little window, we’re going to kick it all the way open and take that moment. And sometimes it can be perceived as taking all the air out of the room or, “Wow, she is so big, she’s so [loud].”” She continues: “But it’s also the very thing that makes us unique; it’s the history of what the Black woman has had to endure that has become part of our DNA. So when you see that window just crack open, you push through.”

#3. On whether she brings the Black female lens to her work:

When asked if she feels her Black female lens brings something totally different, Regina implies that people need to stop seeing Black women in Hollywood as monoliths because they all have different perspectives to offer.

“I’ve been asked that question as well, Gina, and you know how I’ve answered it? “Absolutely. But what my Black female brings to it is different than what Gina’s Black female lens brings to it.” We could tell a story that could be about the same subject matter but be a different perspective.”

A fashion and pop culture writer who watches a lot of TV in his spare time. At Style Rave, we aim to inspire our readers by providing engaging content to not just entertain but to inform and empower you as you ASPIRE to become more stylish, live smarter and be healthier. Follow us on Instagram @StyleRave_ ♥

Harry Styles and Emma Corrin: protagonists of the film My Policeman