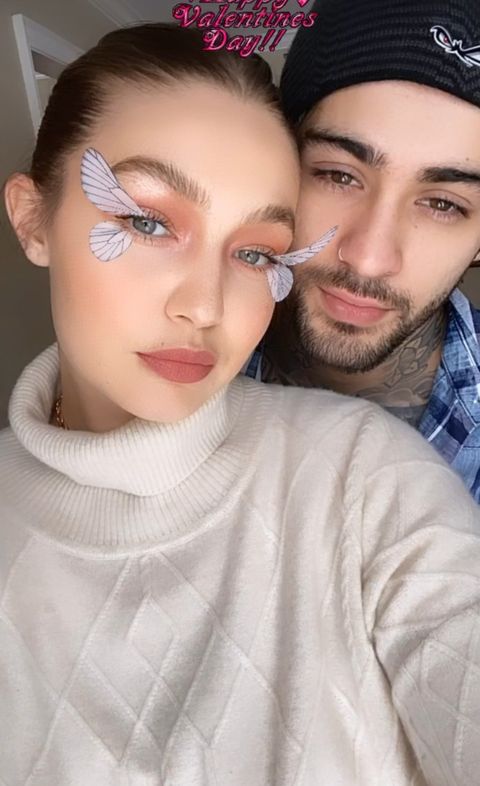 Gigi Hadid and Zayn Malik have been keeping their daughter’s life off social media, but on Valentine’s Day the couple didn’t hold back on sharing their love. On her Instagram story, Hadid shares several sweet photos of and with Malik for the holiday:

She even shared this photo of Malik walking their daughter, Khai, in her stroller:

Here’s another one of Zayn holding his “Dad” mug:

The couple welcomed Khai in September 2020, but they didn’t reveal her name until last month, when Hadid subtly changed her Instagram bio to “khai’s mom.” If you looked closely at the Hadid-Malik Christmas tree in December, though, you would have seen the baby’s name on a present (you have have had to look really close).

A source close to the couple told TMZ that they named their baby Khai in tribute to Hadid’s grandmother Khairiah on her father’s side.

In January, a source told Entertainment Tonight that Gigi and Zayn “share the same values when it comes to culture, family and parenting. Gigi and Zayn both have very close relationships with their families and raising their daughter with that same loving environment is very important to them.”

Hadid has also spoken out recently about how she and Malik want to raise their daughter and are adamant about giving her the chance to live a quiet life surrounded by nature.

“I think she’ll definitely be raised here,” Gigi said in an interview with Vogue, referring to her family’s farm in Pennsylvania, where Khai was born. “The greenery and the farm-y lifestyle are similar to what made me feel really centered as a kid, and I think that’s really important to Zayn and me. I think that just giving your child the opportunity to explore different interests is such a beautiful thing.”

Hilary Weaver
Hilary Weaver is a freelance writer based in New York who writes about politics, queer issues, Meryl Streep, Glenn Close, and every woman the Queen has ever made a dame.

Chloë Grace Moretz’s Outfits as Kayla in Tom and Jerry

Chloë Grace Moretz’s Outfits as Kayla in Tom and Jerry