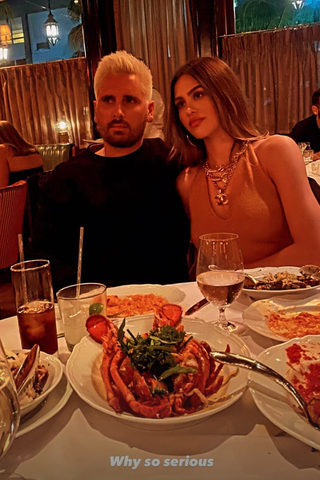 “why so serious?,” Disick wrote on the first photo.

“Just kiddin,” he wrote on the next photo of the couple laughing.

Hamlin posted footage of a boat ride with Disick. She included this photo:

The couple was first photographed spending time together in late 2020; they were also seen flirting in Instagram comments and reportedly attended Kendall Jenner’s Halloween birthday party together. In November, a source told Us Weekly that Disick and Hamlin were not serious:

“Scott and Amelia hanging out is nothing serious at the moment,” she said. “He’s dating around and having fun.” The source added that Disick’s longtime friend Marie Lou Bartoli introduced Hamlin and Disick.

Hamlin, a model, is the daughter of actress and Real Housewives of Beverly Hills star Lisa Rinna. Disick is Kourtney Kardashian’s ex and the father of their three children, Mason (11), Penelope (8), and Reign (6). Disick and Sofia Richie dated for about three years. Surrounding their split in the summer of 2020, a source told E! News that things had been “on-again, off-again.”

“Things haven’t been great between them,” the source said. “Scott’s been spending every day with Kourtney and the kids and has been vacationing with her.” The source continued: “Things are always tense between Scott and Sofia when he goes away without her…They are still in contact and have seen each other multiple times in the last month, but are not as inseparable as before.”

Hilary Weaver
Hilary Weaver is a freelance writer based in New York who writes about politics, queer issues, Meryl Streep, Glenn Close, and every woman the Queen has ever made a dame.