Lana Candor Wears Aritzia, Keds & Lots Of Vintage In To All the Boys 3 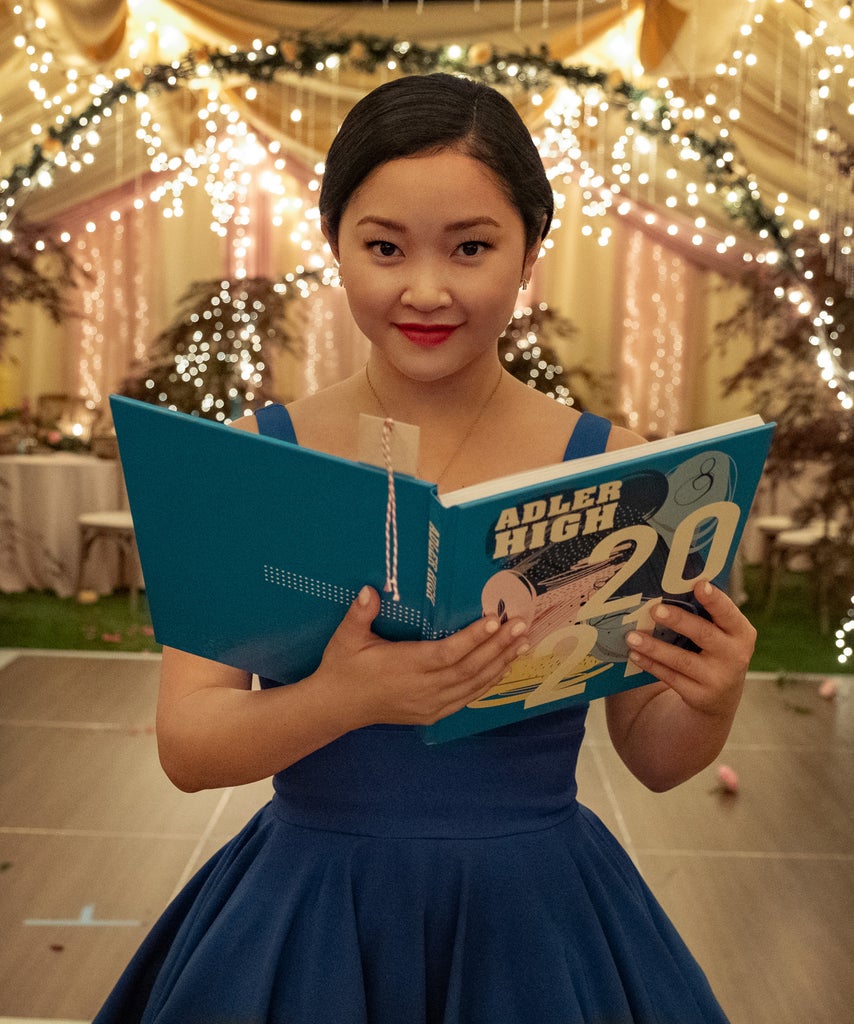 Warning: Spoilers for To All the Boys: Always and Forever ahead.

In a bittersweet moment, the final Netflix movie adaptation of Jenny Han’s popular YA book series, To All the Boys: Always and Forever, brings the trilogy to a close. Cue the tears because our wordsmith dreamer, Lara Jean Covey (played by Lana Condor), is about to graduate from Adler High School. She’s at a crossroads: Will she attend Stanford with boyfriend Peter Kavinsky (Noah Centineo)? Or take her own path, perhaps at her “one East Coast option,” to which she applied to demonstrate to sister Margot (Janel Parrish) that she’s not “a failure at adulting.” As she weighs her options, Lara Jean experiences every senior’s rite of passage — and her signature pink-, cyan blue-, and yellow-filled wardrobe evolves as she gets ready to enter the new stage of her life.

The movie opens with a Covey family spring break vacation in Seoul. “South Korea was very colorful when we were there,” says the film’s costume designer Lorraine Carson, who went from the second installment straight into the third. With this in mind, she gave Lara Jean’s signature palette a bright, poppy, and energetic twist.

Fortunately for us, Lara Jean’s on-point accessorizing from the previous films continues in this installment. A bubblegum pink belt brightens up a brown, polka-dotted Forever 21 romper for a requisite noraebang (karaoke) session with Margot and Kitty (Anna Cathcart). For the look, Carson tailored the ‘50s-style bodice. “It was giving her a little more mature, more body-conscious [look from] before,” says Carson. “She’s coming into her own [now].”

Upon returning, Lara Jean finishes out senior year in deeper pinks, as opposed to earlier naive, soft pastels and longer hemlines. Lara Jean’s wardrobe also incorporates more vintage pieces than the sequel to showcase her creativity, individuality, and self-discovery. “Lara Jean has this flair for putting together things that she finds: vintage and things that she makes,” explains Carson. “So we incorporated more of her personality into these clothes. As she was maturing, the clothes are maturing.”

But Lara Jean has always been an old soul. Nowhere is this more clear than when she packs for another crucial milestone: the senior trip to New York City. “Aren’t these cute?” she asks her cool best friend Chris (Madeleine Arthur) while holding up chunky white sneakers. “They’re commuter shoes. New Yorkers wear them to the office and change when they get there. I want to look like a local.” Glancing up from giving herself a sparkly black mani, Chris retorts, “You’re going to look like a tourist who looked up ‘New Yorkers’ on Google.”

Reflecting her efforts to cop a big city vibe, Carson upped Lara Jean’s wardrobe game with customized vintage pieces. “She’s a little more sophisticated because she wanted to fit in, coming from a small town in the Pacific Northwest,” Carson says. While sneaking out to Manhattan’s Little Cupcake Bakeshop with Peter, Lara Jean wears a preppy blue-and-pink windowpane plaid shirt, cut from a vintage dress. Carson used the excess fabric to create an adorable cuffed cap-sleeve. She paired the top with retro-inspired flat-front lavender trousers, from River Island, featuring a panel of very-Lara Jean ruffled bows.

“[She’s showing] more of her own personality, and her own fashion sense coming into a place that is all about fashion,” says Carson.

The next day, while in Washington Square Park with Chris, Lara Jean connects with an NYU-bound Gen (Emilija Baranac), who invites them to a college rooftop party that looks way chicer than the sloppy Solo cup fests of my recollection. Lara Jean fits right in with her sunny yellow vintage dress, with delicate striping and dot patterns. For the look, Carson swapped out the original black buttons for “camera-friendly” marigold fabric-covered ones. “You can’t go out and buy it in the stores,” says Carson. “It’s what makes Lara Jean, Lara Jean.” A pink cotton belt and, yes, commuter-friendly white leather platform Keds add a contemporary touch to the otherwise-retro look.

Of course, Chris — who wants to visit CBGB (who wants to tell her?) and astutely observes, “We have all these stores in Portland” — knows how to perfectly dress for New York City with her ‘70s to ‘90s-influenced wardrobe. “We mixed together a bit of rock ‘n’ roll style and a bit of boho,” says Carson. “It was totally the personality that we were going towards from day one.”

But Chris goes full ‘90s, with a dash of Regency thrown in, after acquiescing to Trevor (Ross Butler)’s promposal. Carson shortened a deep green satin Faviana slip dress, with a lace-up back, to a below-the-knee length to showcase Steve Madden stiletto sandals (and gymnastic-level dance moves). The less formal length also leaned into Chris’s too-cool persona. “[She’s like,] ‘’I’m not dressing up. I’m putting this on. I just happened to have this in my closet,’” laughs Carson. Her punk-y take on 19th-century opera gloves completes the look.

Carson again created a custom look for Lara Jean’s prom moment, combining components of three dresses into one for her crystal-embellished and floral-embroidered lace bodice gown. According to her, the BFFs’ prom looks illustrate the effects of their transformative senior trip: “They had become a little more sophisticated.”

Lara Jean’s fashion culminates in the heartfelt nuptials of Dr. Covey (John Corbett) and chic neighbor Trina (Sarayu Blue), who conveniently chose the To All the Boys signature blue and pink as her wedding colors. Complementing the bride’s blush BHLDN dress, the Covey sisters wear a spectrum of blues — starting with Lara Jean’s again-customized fit-and-flare matte satin dress, coincidentally from a prom line, Leena for MacDuggal. Carson amplified the skirt silhouette with a structured, flouncy crinoline underneath and accessorized with pink Michael Kors stilettos. “It made her stand out,” she says.

But, let’s be honest, Kitty — with her signature “feminist” nameplate necklace, playful printed tops, and talent for accessorizing — has always been the high-key fashion icon of the Covey family. So obviously, the youngest sister declared that she will wear a tuxedo. Carson tailored a single-button pantsuit by Theory, and, in lieu of traditional neckwear, tied a thin ribbon around the collar of a pale blue Uniqlo shirt. “Which was a very 1920s thing to do,” explains Carson. “I was trying to incorporate all these levels, in the tiniest way even, of different periods for the girls to make them a little more eclectic.” Carson then gave Kitty’s silver glitter Kate Spade Keds additional flair with silk laces.

Ultimately, Lara Jean decides to attend NYU, after falling in love with the city. The final scenes capture that moment of that special time in your life: feeling the excitement and anticipation to explore new experiences, relationships, and personal style. “You could just see her going into New York and going into all these great stores, buying things and mixing them together,” says Carson.

The freshman English Lit major exhibits this through a new razored lob and fresh citrus-y color palette: an orange denim skirt from Aritzia’s Wilfred line and a fitted buttercream T-shirt from the Canadian retailer’s Babaton line. Even her sneakers elevate to Jasmine creeper platforms from the Browns Wishbone collection. “She was fitting into New York in her Lara Jean style,” says Carson. “That was her new start.”

Like what you see? How about some more R29 goodness, right here?

The Prom Costumes Have The Broadway Sparkle

There is no time to lose. Creativity during the pandemic

Bob Hair: The summer trend is called the little bob