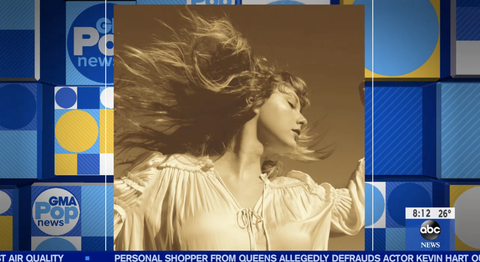 Taylor Swift made a brief appearance on Good Morning America today to share big news: More music is coming—old new music, actually. The singer revealed that the highly-anticipated re-recording of one of her biggest singles, 2009’s “Love Story,” will come out at midnight. She is also releasing her full re-recording album of Fearless soon, and it will have 26 songs—more than the 13-track original, including six never-before-heard tracks. She subtly revealed in her note later the album will come out on April 9.

On Good Morning America, she said: “I’m so excited to share with you that tonight at midnight, I’ll be putting out my version of my song ‘Love Story,’ which was originally on my album Fearless,” Swift started. “I’ve now finished re-recording all of Fearless, which will be coming out soon. My version of Fearless will have 26 songs on it because I decided to add songs from the vault, which are songs that almost made the original Fearless album, but I’ve now gone back and recorded those so that everyone will be able to hear not only the songs that made the album but the songs that almost made it, the full picture.”

The singer’s note included a hidden message. If you string together the capitalized letters, it spells out “April Ninth”—April is the fourth month of the year, and 4+9 = Taylor’s lucky number of 13.

Swift just released her ninth album, evermore, in December. That same month, she shared the first look at the new “Love Story” in a commercial for her friend Ryan Reynolds’ ad agency’s Match.com commercial. “Okay so while my new re-records are NOT done, my friend @VancityReynolds asked me if he could use a snippet of one for a LOLsome commercial he wrote so…here’s a sneak peak of Love Story! Working hard to get the music to you soon!!” Swift wrote on Twitter, retweeting Reynolds’ commercial video.

The masters for Swift’s first six albums are owned by her former record company, Big Machine Label, where the singer started her career. Big Machine and those masters were acquired by Scooter Braun in June 2019, which Swift described at the time as her “worst case scenario,” in part due to “the incessant, manipulative bullying I’ve received at his hands for years.”

Braun ultimately sold those masters to private equity company Shamrock Holdings in fall 2020. In her comments on Shamrock Holdings’ purchase, Swift gave details about where she is in the re-recording process. “I have recently begun re-recording my older music, and it has already proven to be both exciting and creatively fulfilling,” she wrote. “I have plenty of surprises in store 😎 I want to thank you guys for supporting me through this ongoing saga, and I can’t wait for you to hear what I’ve been dreaming up.”

Swift was legally able to begin re-recording her music in November 2020. She will own all her re-recorded music (and all other music she makes) under her deal with her new record label, Republic Records.

She explained why re-recording her old music is so important to her during her August 2019 appearance on Good Morning America. “I’m very excited about it [re-recording the songs],” she said, “because I just think that artists deserve to own their work. I just feel very passionately about that. Yeah, it’s next year [I’ll start doing that]. It’s right around the corner. I’m going to be busy. I’m really excited.