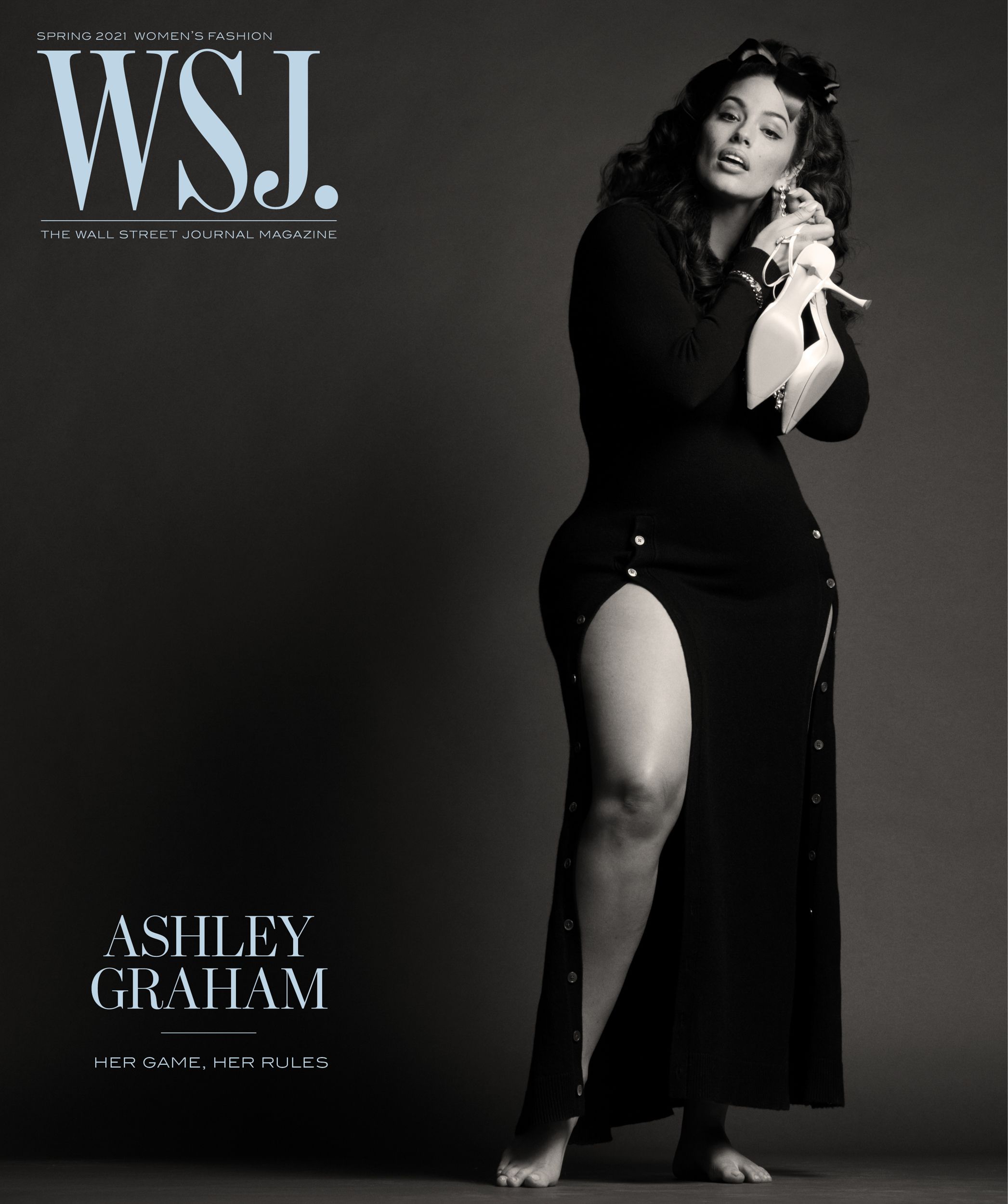 Ashley Graham, the plus size model who, over the years, has conquered the modeling industry enters Zoom looking photo-shoot ready. The 33-year-old supermodel, mother, pod-cast host, activist and businesswoman is in her Brooklyn rental’s second bedroom, which doubles as an office for her and her husband, the cinematographer Justin Ervin.

“It is a disaster,” she says of the current space they’re using while their nearby loft is in its third year of renovations. Graham, on the other hand, appears pulled together, wearing subtle makeup and an oatmeal-colored cardigan from Khaite. Then she tilts her screen down to reveal she doesn’t have on any pants. “I’m wearing underwear that I wore when I was pregnant,” she says of the black, full-coverage briefs.

Navigating the line between glamour and accessibility has become Graham’s hallmark. Her 21-year career as a model has included a great deal of firsts. Ashley Graham was the first size 14 model featured on the cover of the Sports Illustrated Swimsuit issue, in 2016; the first plus size model to appear on the cover of Vogue, in 2017; and the first curvy model of her generation to receive a major beauty contract in the United States, as a Revlon ambassador in 2018.

“My brand is about confidence and owning who you are and being honest with who you are,” she says. “I think that’s incredibly reflective of my Instagram, my YouTube, my podcast. I just wish that I had someone that was as real and honest and open when I was in middle school, high school, moving to New York.”

Her mother, Linda Graham, enjoyed sports in college, and Graham was an athletic kid too. “Nothing fit in the kids section where all my girlfriends were shopping, so I had to go to the mature woman section,” she says. “Even that stuff was either too big or so matronly. So I would cut up really small clothes and then wear very provocative outfits.” Graham grew up moving between Texas, Georgia, Arkansas and New Hampshire before settling in Lincoln, Nebraska, where her mother is still based part-time, in junior high. (Her parents divorced in 2013.) She was discovered at a mall and started modeling at 12. In an industry where plus size can mean wearing a size 8, Ashley Graham did a lot of catalog work as a model and was told she would never do editorial.

Graham wore around a size 14 in an era in fashion when lithe models like Gisele Bündchen dominated the runways. Plus-size models made up less than 1 percent of runway models, and they were mostly absent from fashion magazines, let alone having any sort of household name recognition. Her agency, Ford Models, dropped its curvy division in 2013. Graham organized a group of other curvy models and approached a rival agency, IMG, proposing they be added to the roster, and it worked. Culturally, the idea of body positivity—that diets don’t work and that we should stop hating our bodies and learn to appreciate them as they are— was percolating into the mainstream, thanks, at least in part, to images shared on social media of Graham.

She was suddenly everywhere: smiling in a bikini on the cover of Elle Québec, her first magazine cover, in 2014; walking the run- ways for Michael Kors, Prabal Gurung and Dolce & Gabbana; and wearing a formfitting blue dress while giving her 2015 TEDx Talk, “Plus-Size? More Like My Size,” on how she learned to stop devaluing her body. “Back fat, I see you popping over my bra today. But that’s all right. I’m gonna choose to love you,” she says in the video.

Here are some of what Ashley Graham revealed to WSJ. Magazine…

Graham on moving to NY when she was 17:

“I didn’t know how to cook for myself; I didn’t know how to take care of myself. That’s when I got my freshman 30, and my weight skyrocketed,” she says. “My self-esteem plummeted, and I had my agents telling me if you don’t lose weight, then you’re not going to work. The lowest part of realizing that I didn’t get a job because I was ‘too fat’ actually gave me the courage and the ambition to go and fill a void in an industry.”

Graham on the genesis of building a business:

“I never had another older, more experienced model come say like, ‘Hey, this is how you should be doing this,’” she says. “I decided to build out my business within lingerie [because] if you’re not going to make me a sexy, supportive bra that I want to wear constantly—then I’m going to make it.” She began designing a swimwear line with the size-inclusive brand Swimsuits for All. Graham modeled in an ad for the brand that was featured in the 2015 Sports Illustrated Swimsuit issue, and the magazine put her on the cover the following year. “Then it was just like, we’re building a business,” she says.

Graham on her desire to usher in more diversity in the industry:

“This has to be the moment where fashion changes—where TV, film, everything changes,” she says. “If you’re not talking about something that you’re passionate about, then what are you using your platform for? How are you creating change?”

Graham on expanding her family:

“I would get pregnant yesterday if I could,” she says. “I’ve ‘accidentally’ had unprotected sex while I’m ovulating just to see if I can while I’m breastfeeding.”

Graham on BLM and raising a biracial child:

“It’s been a very big conversation in our family, and, having a biracial son, it has to continue,” she says. “It took women to start a movement like this, a worldwide movement,” Graham says. “Something that Patrisse told me that I thought was really great was that a lot of people’s concept of Black Lives Matter is that it’s…only speaking about Black death. But in reality, it’s truly about Black life and how to continue to save Black life…. For anybody who’s not educated in this, it’s time to get educated. You have no other choice.”

Graham on motherhood and multitasking:

Graham is mulling projects about the challenges of navigating work and motherhood. She’s planning to wean Isaac sometime soon: “I’m just like, I am not your pacifier, I am a boss, I am a businesswoman. I have shit to do,” she says.

“She’s exactly what you think she is—she’s super sweet, funny, grounded, down to earth, chill. And no, that is not always the case,” says Demi Lovato, a friend and former guest on the podcast who was introduced to Graham at the 2017 Time 100 Gala. “When I met her I was still struggling with an eating disorder to some degree, [and there was] this woman with full confidence in her appearance, confidence within herself as a woman,” Lovato says. “Imagine she’s this giant waterproof jacket and someone pours [negativity], and it just rolls off of her.”

Graham on her ultimate goal:

Gayle King on Ashley and her aspirations:

“If she wants a talk show, she will get one. To have a successful talk show, you need likability and relatability,” says Gayle King, a co-host of CBS This Morning. “[She’s] always unapologetically and uniquely herself.”

When Pretty Big Deal launched, Graham reached out to King, whom she had met at an event a few years ago, to discuss what makes a good interview. “It’s not like she needs advice,” King says. “She’s supremely confident, and that’s a good thing.”

Graham on designing a fashion line:

“Sixty-eight percent of American women are size 14 and above. The problem is that most brands, they’re not producing a sizing that’s reflective of who we are. It’s actually hurting everyone—the consumer and the brand,” she says. “I think that there need to be initiatives within the design schools, that there need to be mandatory classes that designers take, because there are none. The education is not there.”

Graham on her current size:

Ashley Graham on what motivates her:

“I hate that I constantly have to discuss my body, because I don’t know any man that has to do that. But what motivates me to continue to talk about my body is that I didn’t have someone talking about their body when I was young,” she says. “This is why I don’t post like the ‘perfect’ Instagram photos. I keep it real and raw constantly because I want [people] to know that there are women with cellulite, with back fat, with stretch marks…. There are a lot of curvy women, plus-size women, fat women, whatever you want to call them.”

So what would she like to be called? Graham answers, without a pause: “A woman.”

A Beginner’s Guide: The A to Z of Fashion Terms – THE YESSTYLIST – Asian Fashion Blog

A Beginner’s Guide: The A to Z of Fashion Terms – THE YESSTYLIST – Asian Fashion Blog