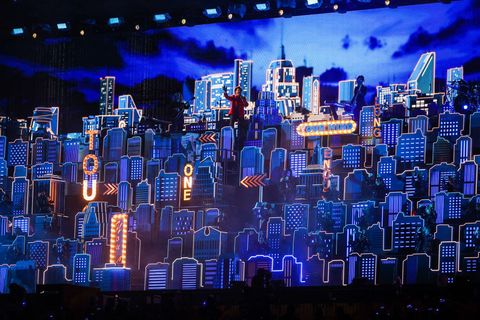 The Weeknd—like Super Bowl performers Jennifer Lopez, Shakira, Beyoncé, and more before him—is no strangers to commanding the stage, selling out arenas for thousands of fans and grossing big bucks every tour stop. But this past Sunday, the 30-year-old singer took the stage for the biggest performance of his career, the coveted Super Bowl halftime show—and didn’t get paid a cent for it. In fact, he put $7 million of his own money into the show.

It’s not unusual for Super Bowl performers to basically perform for free. According to Forbes, they do walk away with something called union scale, which is “a fraction of the six- and seven-figure sums these acts have banked on a nightly basis.”

But The Weeknd invested in his performance, paying more than many other performers have to make the concert what he wanted it to be. The Weeknd put $7 million of his own money into the show, in order to “make this halftime show be what he envisioned,” his manager Wassim “Sal” Slaiby told Billboard.

The Weeknd’s performance did have an intricate, lit-up Vegas-themed custom stage and lookalike dancers outfitted in bandages and red suits. He isn’t covering the cost of that alone by any means: The NFL will be footing the bill for production costs, hence the technically free performance. The Weeknd’s $7 million is on top of that. In addition to having production costs covered, performing in front of millions of people grants The Weeknd even more exposure, which could turn into music streams and downloads (because getting “Blinding Lights” out of your head post-Super Bowl might be a little tricky).

Forbes reported that following Justin Timberlake’s 2018 Super Bowl performance, there was a 214% spike in his Spotify stream. The year before that, 2017 Super Bowl performer Lady Gaga’s album Joanne returned to the Billboard 200 chart following its released months earlier in October.

It’s a win-win situation for everyone.

This post has been updated with 2021 Super Bowl performance details.