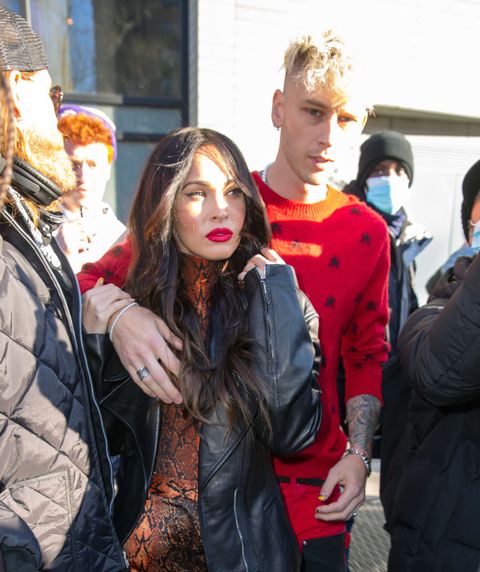 Megan Fox isn’t engaged to her “twin flame” Machine Gun Kelly yet, but Kelly does want to marry and have children with his girlfriend of less than a year. Fox may not be ready to move ahead with that just yet though, according to Entertainment Tonight‘s source. The possibility is very there that their relationship will be that serious someday but not now.

As the outlet’s source explained, “An engagement could be in Megan Fox and MGK’s future and same with having kids together. MGK definitely wants both of those things, but Megan is a little hesitant right now. In the meantime, they are constantly laughing together and always have the best time.”

Fox has three sons with Brian Austin Green, her ex-husband from whom she is currently in the process of divorcing. Kelly has one daughter, 11-year-old Casie Baker.

Entertainment Tonight was told by a source in December that Fox and Kelly could be a little on-off sometimes, although their relationship is generally going well.

“They are going strong, but Megan is the type of person who likes to keep her partners on their toes so one day she can be super hot and another, she can be cold,” the source said. “MGK doesn’t mind the back and forth and they’re definitely more ‘on’ than ‘off’ on most days. Megan’s relationship with MGK is healthier than her relationship with Brian was, especially during their last year together.”

Fox shut down engagement rumors last weekend, by the way. A source told People that the two are happily together, but Fox is focused on finalizing her divorce from Green before taking any next steps with Kelly.

“They are very serious and plan on spending the future together,” People‘s source said. “There will be an engagement at some point, but they are not engaged now.”

“Megan needs her divorce to be finalized before she can fully move on,” the source added. “She is very happy though.”