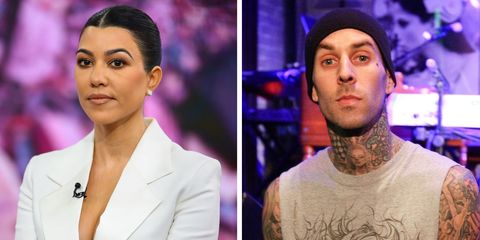 Well, the rumors are true, after all: longtime friends Travis Barker and Kourtney Kardashian are reportedly dating now. People, Entertainment Tonight, Us Weekly, and E! all separately confirmed the speculation yesterday, with sources telling all three outlets that Barker and Kardashian have just recently become romantically involved.

People‘s source gave detail on how long the couple was secretly together before the news broke. “They’re in Palm Springs together,” the source said. “They’ve been dating for about a month or two. They’ve been friends for a long time, but it’s turned romantic.”

An insider added that Barker has been interested in Kardashian for quite some time. “Travis has liked her for a while,” that source said.

E! reiterated that report through its own source. “Travis has always had an eye for Kourtney,” its source said. “The chemistry and flirtation has always been there. They have a lot in common, and Kourtney has always been attracted to how Travis is as a parent. He’s an amazing, hands-on dad, and Kourtney loves that about him. They love relaxing at home with their kids, and everyone gets along. It’s going well, and they aren’t putting pressure on it being super serious at this point.”

E! also got detail on what their relationship is like: “It’s been very low-key,” a source said. “They are a really good match, and Kourtney’s entire family already loves Travis. They have been neighbors and great friends for years, and it just recently turned romantic.”

Us Weekly was told by its own source that now, Barker is “very smitten with Kourtney and has been for a while.”

Entertainment Tonight‘s source, meanwhile, detailed the history of their friendship leading up to their romance. “Kourtney and Travis have had a platonic relationship for years and they’ve been friends and family friends for a very long time, but recently something sparked and their relationship has turned romantic,” its source said.

“They live on the same block and things are super easy between them because they know each other so well and just click and get one another,” the source added. “Her kids and his kids get along so well too, which is a major plus for both of them.”