Kylie Jenner Quietly Unfollowed Almost All Her Friends on Instagram, Including Sofia Richie 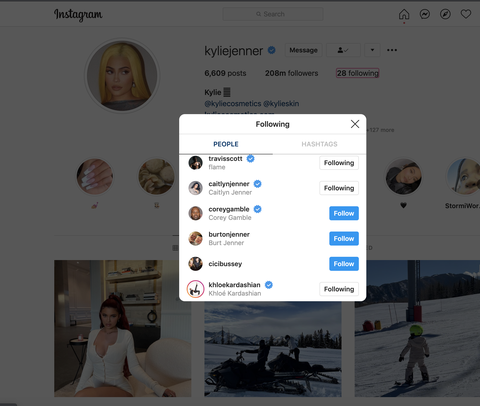 Kylie Jenner gave her Instagram following list a major trim this week, E! is reporting, with the makeup mogul unfollowing almost all of her friends, including Sofia Richie, her former assistant-turned-friend Victoria Villarroel, and her go-to platonic date Fai Khadra. Jenner now only follows 28 accounts, and nearly a third of them are fan accounts about her.

The rest seem to be family (all the Kardashian and Jenner siblings), although her ex-boyfriend Travis Scott and best friend Stassie Karanikolaou remain on the list. Why did Jenner mass unfollow essentially all but one of her close friends? E! didn’t speak to a source about Jenner’s intentions, but the outlet noted that because Jenner unfollowed people like Khadra who very much remain close family friends, there doesn’t appear to be any drama attached to her following list cleanup. She just wanted a cleaner feed.

That said, Jenner and Richie do have more distance these days, following Richie’s split from Scott Disick, Jenner’s sister Kourtney Kardashian’s ex-boyfriend and the father of her three children.

Us Weekly reported in August that Jenner purposely didn’t attend Richie’s birthday trip to Cabo San Lucas because she wanted to avoid causing any awkwardness with her family. (Yes, the fact that Los Angeles had been under a safer at home order for months at that point, urging residents to avoid non-essential travel because of the coronavirus pandemic, was apparently not Jenner’s biggest motivation to skip the festivities abroad. In fact, Jenner drew criticism that August for ignoring the non-essential travel ban and taking a trip to Turks and Caicos that August for her own birthday.)

A source explained the two’s relationship to the outlet, stating, “Sofia and Kylie are still friends, but Kylie decided to stay back and not go on Sofia’s birthday trip to avoid any awkwardness. Kourtney isn’t upset by Kylie and Sofia’s friendship and wouldn’t tell Kylie what to do, but the Kardashians are extremely loyal to each other and Kylie felt she was better off staying behind.”

The source added that Disick actually would have “been bothered more than Kourtney if Kylie were to have gone.”

Sanremo 2021: the best beauty looks of the Festival