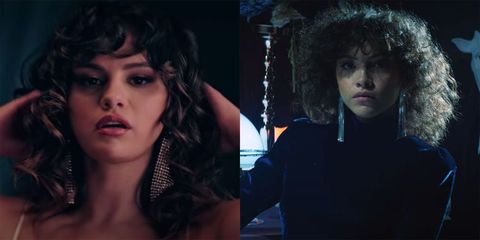 The Weeknd continued his After Hours music video series—one where he has played a character injured and in bandages, serving partly as a message against drunk driving—with his “Save Your Tears” video. In the new video, The Weeknd’s bandages are off—and the results of his character’s plastic surgery are visible. There’s heavy symbolism packed into the four-minute music video, with a woman bearing a strong resemblance to his ex-girlfriend Selena Gomez appearing at one point.

Compare the woman to how Gomez was styled for her “Dance Again” music video:

She is the only person in the music video besides The Weeknd not wearing a mask. His character brings her up on stage with him; he has a gun behind his back, the lights go out, and suddenly it’s in her hands, against his head, but she doesn’t want to shoot. Some fans have interpreted it as a message about heartbreak not destroying The Weeknd. Later in the video, The Weeknd extends the point to critics and the industry, symbolized by the masked audience, not destroying him either. He points a gun to his head, shoots in front of them, and confetti comes out. They applaud.

Strikingly, The Weeknd wears a red jacket and black pants in the music video, similar to what he wore at the American Music Awards in November, where he accepted his awards with his face in bandages as part of the album’s visual narrative. Around the same time, The Weeknd was photographed filming a music video, according to Just Jared. He had bandages on in the photos taken of him at work.

The Weeknd and Gomez dated from January 2017 to October 2017. Gomez spoke about being amicable with him post-split in November 2017 in an interview with Billboard. “The best part [of being single]?” Gomez said. “It’s actually… you know what, though? Something that I’m really proud of is that there’s such a true friendship [between me and The Weeknd]. I truly have never experienced anything like that in my life. We ended it as best friends, and it was genuinely about encouraging and caring [for each other], and that was pretty remarkable for me.”

Gomez has since publicly shown support for The Weeknd, including his song “Snowchild” on her Spotify playlist in April 2020 and on her Instagram Stories quarantine entertainment music list in March 2020. Fans speculated The Weeknd may have timed the release of the “Snowchild” music video with Gomez’s birthday.